What is bariatrics? What does bypass mean? Now you can learn everything about the phrases!

Bariatrics:medical field dealing with the treatment of pathological obesity; treatment or surgery for the obese.

Body mass index (BMI): it is a value derived from the height and the mass (weight) of a given person. During the calculation, the body mass (given in kilograms) is divided by the square of the body height (measured in meters).

Obesity:is a condition when body fat production/storage reaches a level that can be harmful for one’s health. It may lead to decreased life expectancy and several other health problems. A person is considered obese when his/her body mass index exceeds 30 kg/m².

Reasons of obesity: it is caused by genetic/central nervous system or endocrine dysfunction of metabolic processes (or dysfunctions caused by environmental impact) that lead to the modified balance of body energy. This process results in increased food intake and/or decreased energy transmission and finally ends up in intensified fat production. Most commonly, it is caused by joint factors: extreme calorie intake, the lack of exercise and genetic predisposition. However, in some cases primarily genes, endocrine disorders, medication or mental illnesses are the main reasons. There is only a little evidence for the theory that due to their slow metabolism, obese people gain weight even when they eat only little amounts. Generally, obese people use more energy due to needs of the bigger body mass.

Due to 2000 statistics, the average life expectancy at birth is 71,3 years in Hungary. This number falls behind with nearly a decade compared to the life expectancy of the Japanese, and it’s partly because of the obesity rate and its connected illnesses.

Dumping syndrome: the phrase stands for a series of symptoms when food or liquid moves to the  small intestine too quickly. These can be cramps, nausea, diarrhea and dizziness. Dumping syndrome may occur to those as well who had some parts of their gastric removed.

Duodenum: is part of the alimentary canal, a horseshoe shaped cavernous organ that connects the stomach to the jejunum.

Choler and pancreatic juice that enters duodenum get mixed with aliment here. Here, the digestion that started in the stomach continues, and nutrient absorption also takes place. Duodenum takes part in controlling the surrounding organs, stimulates the gall bladder to contract and release stored bile into the intestine and stimulates the secretion of pancreatic juice.

The main goal of this conditioning is to mix nutrients entering the small intestine evenly with gastric juice. The pH level should be 7 (neutral) and isotonic.

Cholelithiasis: Gallstones can develop in the gall bladder – that stores the choler separated by the liver – and the common bile ducts. Choler contains water, bile salts, lecithin, cholesterol and other materials that are produced by detoxifying liver functions. If the compound of choler changes, stones may get produced. They can range in size from a grain of sand to a pigeon’s egg.

Gallstone disease is mostly symptom free, sometimes they get discovered during x-rays or surgeries accidentally. However, in many cases it only gets diagnosed when symptoms or complications appear. Consuming greasy food can cause symptoms, as it forces the gall bladder for multiple contraction, to discharge the choler into the alimentary tract. If it exceeds a certain size (when its diameter gets bigger than 8 millimetres), the gallstones close cystic duct and/or the common bile duct.

The occlusion of the gall bladder results in bilious attack. Its most common symptom is the intense, camp-like pain under the right lower rib and it mainly radiates towards the right shoulder. Pain appears minutes after eating, it can be caused by greasy and heavy foods. Pain may be dull or sharp like a stab with a knife. Cramps repeat. If the undischarged choler gets infected, cholecystitis (inflammation of the gold bladder) evolves. In that case pain comes with high fewer and yellowness.

Ileum: third part of the small intestine, positioned between the jejunum and the large intestine.

Jejunum: part of the alimentary tract, middle element of the small intestine’s three parts, positioned between the duodenum and the ileum.

Laparoscopy: endoscopy is the examination and surgical treatment of hollow organs (for instance the urinary bladder, prostate, abdominal cavity, thoracic cavity, brain, joints, intestines, gastric) carried out with an endoscope. Intervention happens through a little cut or a natural orifice. The optical equipment that is used, makes a recording which can be followed on a monitor.

Laparoscopy is a field of endoscopy, where diagnostic and curative interventions happen in the abdominal cavity. Advantages of laparoscopy include smaller surgical burden, faster rehabilitation, better cosmetic results and fewer days spent in the hospital.

Diabetes: in Latin it is called diabetes mellitus. It is a glucose processing disorder, meaning the lack of insulin hormone produced by the pancreas, insulin resistance or both. Lacking the necessary level of insulin, cells are not able to pick up glucose from the blood, thus the blood sugar level increases. These things combined cause the main symptoms of the disease.

We differentiate between two types:

Type 1 diabetes or insulin-dependent diabetes. Its main reason is the destruction of the pancreas’ islet cells (Langerhans islet cells). Generally the disease appears before the age of forty, patients are quite slim, symptoms develop rapidly and are quite serious. Treatment happens in the form of insulin replacement.

Type 2 diabetes is more common, it is often called non–insulin-dependent diabetes mellitus. In this case of the disease, there is an insufficient level of insulin in the body system, thus it has no proper effect.  Generally the disease appears after the age of forty, patients are mostly obese. Symptoms develop slowly, sometimes it takes years. Very often the disease is discovered during routine medical check-up. Treatment includes diet, medication or adding insulin to the body system, or the combination of these.

Fatty tissue: a kind of body tissue containing fat, with a main goal to store energy. It also protects the body and certain organs from external physical effects.

Depression: emotional state of hopelessness, described by unhappiness and high levels of lethargy.

Follow-up examination: examining changes; keeping track of any changes of a process and how it corresponds to desired results.

Consultation: asking for medical opinion, the goal is make a decision concerning the patient’s diagnosis and treatment.

The surgical treatment of obesity – bariatric surgery – is getting more and more popular.

Treating obesity with the help of surgery, bariatric surgery, is a rapidly growing surgical field. One reason is that the number of obese people is continuously growing. The other reason is that traditional treatments such as diets and medicines are unsuccessful in many cases. Surgeries provide more efficient solutions.  The two most commonly used methods are gastric sleeve and gastric bypass surgeries. These are laparoscopic surgeries, carried out by equipment led to the gastric, through little cuts. The adaptation of gastric band is becoming marginalized as patients regularly gain back their weight and there is a high risk of complications. 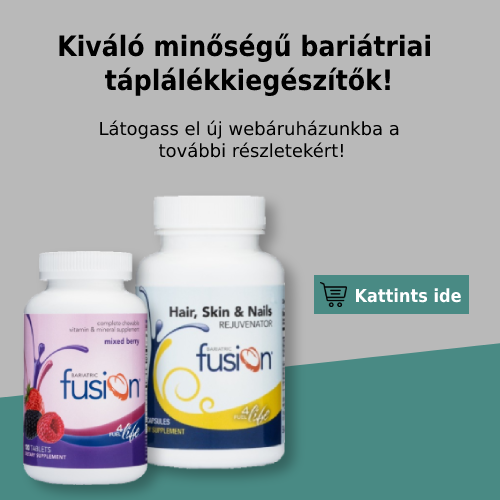 Kérdezz Katától!
Dear Visitor! Please note that we use cookies to enhance the user experience of this website. By using our website you acknowledge our information.I accept